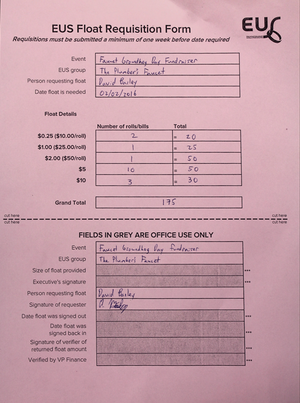 A float refers to a sum of cash provided to a group to act as change for any kind of sale; it's a bunch of bills and coins to make breaking change easier. To make a float request, you can request one online or fill out one of the purple float request forms found in the rack on the right as you enter the Office and put it in the floats folder on the door to the VP Finance’s office.
You must request a float at least one week in advance. Your float will be ready for pickup in the EUS Office on the day that you need it. It is expected that after you have used the cashbox and float for the day, you will return it to the VP Finance Office for safe storage. You can pick it up again next time you are selling.
When you have completed your sales campaign, set aside the amount of money from the original float, and deposit the remainder of your revenues as you normally would. When you return the float, include as many $5 and $10 bills as possible, as well as many rolls of coins as possible. It is acceptable to return a few loose coins if it is necessary to round the value up $5 or something, but otherwise a returned float should look very clean. Return the cashbox and float to the VP Finance Office, and leave a sticky note on it to indicate that you are finished with it. Try to return the float during office hours, when the Administrative Manager or the VP Finance is in the office, so that you can verify the float amount with them. This will protect your group in case the float does not add up later.

You can access the float request form anytime at float.mcgilleus.ca, or by filling it out below.