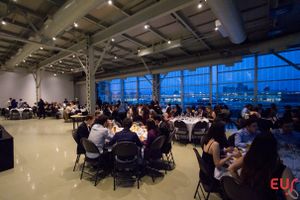 Volunteer Banquet is a banquet held every year to thank all EUS volunteers for their contributions. It is held at the end of March and follows a common format of dinner, drinks and dancing.

Since volunteer banquet is subsidized by the EUS, attendance is by invitation only. Every committee, club, design team and department receives a certain number of invites at the discretion of their exec-in-charge and then these are given out by the chair of the EUS group. Although this event is invitation only, it is quite rare that anyone who wants to go can't due to lack of invitations. Not everyone invited attends and those invitations are reallocated to to other EUS groups who have requested. If you are not invited but interested in attending then let the chair of your group know. They can usually get you an invitation from someone that didn't take theirs.

Part of Volunteer Banquet is announcing all the winners of the EUS awards. The list of awards is quite extensive with everything from the prestigious Big Daddy and Uncle Ed Awards to the more silly Prank of the Year award.

Every attendee is given a commemorative glass as a thank you for their services. The glasses are unique to every year.