Due to the current situation, the 2021 Engineering Games will take place during Study break from February 28th to March 4th 2021.

Engineering Games (also known as Eng Games, or Jeux de Génie, JDG in french) is a province-wide engineering competition around which a community of engineering undergraduate students from 12 different schools is built. The Games themselves takes place during the first week of January every year, but the participants keep in touch and participate in many social events together year-round. 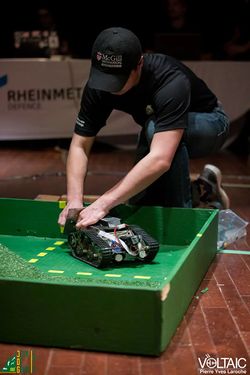 Eng Games has various competitions that aim to showcase the many skills that are required to become a good engineer. These competitions include machine (robotics), academics, consulting, entrepreneurship, debates, improvisation, trivia, and sports.

Known as the most prestigious event of the engineering games, the “machine” is an intense robotics competition involving various disciplines and aspects of engineering. During the four months proceeding the Games, each university forms a team of a few members tasked with building a small robot that will perform specific tasks outlined by the design problem drafted by the Games’ organizers. The presentation takes place in front of the public and is broadcasted online.

There are 6 different academic competitions that take place at Eng Games: chemical, electrical, civil, mechanical, software, and industrial engineering. Each of those disciplines have 2 components, practical and theoretical. Each of them take the form of 3 hour open book exams, labs or small design competitions taken in teams of 3 or 4.

In the consulting competition, 4 students work to conceptualize and present their optimal solutions to a large-scale engineering problem. Social, economic, environmental, and political aspects of the solution have to be considered when presenting to the judges, who represent potential clients. The quality of the solution, the written report, as well as the presentation are all graded to determine the best team.

During this event, a team of two students put their public speaking skills and sharp minds to the test by partaking in a classical debate on a topic chosen by the organizers. The teams are judged based on the relevance of their arguments, and the fluidity of their speech. Professionalism, critical thinking, and clashes of opinion are all in attendance. 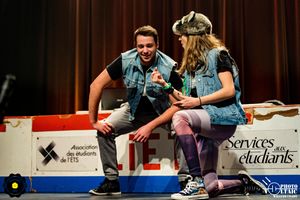 More photos can be found here
During the improvisation competition, a team of 4 participants demonstrate their imagination, creativity, and quick thinking in head-to head matches against opponents, constantly seeking to one up contestants with wit and shock. They have approximately one minute to offer a quality performance to the public, while respecting the imposed rules and official professional regulations. The engineer with a strong sense of creativity for difficult solutions is a favorable asset in this competition.

During the trivia competition, teams of 4 students are tested for their general knowledge in a classic génie en herbe match. There are different rounds of questions and the team who wins a match advances to the next round in the hopes of winning the tournament

This competition gives participants a chance to demonstrate their physical aptitude in a range of sporting matches. The delegations go head-to head in an environment where team spirit is of the utmost importance. Due to the nature of the sporting challenges, the events are not only geared towards the physical ability of teams’ individuals, but also towards testing the cohesion of the their teamwork.

At McGill, the Eng Games executive committee is generally composed of the following:

The chief or co-chiefs are chose by a selection committee, in January. The rest of the executive team are then chosen by the chief or co-chiefs in the following weeks. The executive members can be general members of the EUS or of BESS (bioresource engineering students).
Since Jeux de Génie is an event that is overseen by QCESO, the Eng Games committee falls under the VP External's portfolio. Bylaws for the committee and its positions can be found here.

Each participating school sends a delegation of 44 students, plus 2 graduated ambassadors from other schools, known as godparents (parrains). Each delegation is made up of one (or two) chief(s), the executive committee, machine team members, and general members selected by the execs.

The selection process for the Games is called The Race (also known as La Course). It constitutes in a list of events that the executive committee attend and expect people who want to do the Games to go to. The events vary between parties, improvisation or trivia practices, sports days, etc. To participate in the race, students must buy a race shirt and fill out an interest form. Another way of getting selected to be a part of the delegation is by getting involved in the preparation of the machine or entrepreneurship competition. Join the group MGCIL Enggames 2021! on Facebook to keep track of events, and how to get involved! 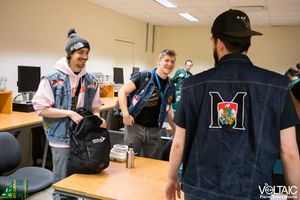 Delegates wearing their jean jackets, as they should.

At Eng Games, every school has a specific item, often called delegation item, that participants are required to wear at all times and at all events. Other school's items include a kilt for Concordia, a bandana for Sherbrooke, a flag for Polytechnique. McGill's item is a sleeveless jean jacket with the McGill Eng Games logo in the back. Participants can then add all sorts of patches and pins to it to make it their own. Jean jackets are the only delegation item that isn't identical for every delegate. In fact, the jackets are usually bought at thrift stores or brought by a delegate, which causes the jackets to vary in color, size and design.

Each school that participates in Eng Games also has a delegation drink for which the recipe is kept only by the chief(s) and parrains. McGill's drink is called Grape Day and can typically be found at the Eng Games Blues Pub at the end of the summer, and at any other event organized by Eng Games throughout the year. Like every delegation drink, it is mixed in an 18L water barrel and usually passed around the room by someone who is considered in charge of the Grape Day. Furthermore, when students are given their jean jacket at the delegation inauguration, they are invited to drink some Grape Day as a symbol of their entrance in the MGCIL family.