From EUSwiki
(Redirected from PPO)
Jump to: navigation, search

This article is a stub. Please consider expanding it.

The PPO was found in 1950 as a fight band. It's main goal was to promote school spirit. Over the 1970's to 80's pranking started to become a new trademark of the PPO. Pranks escalated to some very extravagant ones such as painting the arts dome orange, stealing the gorilla from the Redpath Museum and replacing all the front covers of the McGill Daily. The PPO's final and most infamous prank was unbolting all 800 seats in the Leacock 132 auditorium. This lead to 10% of McGill's lectures being cancelled the EUS being send a bill of $1003.95 (over $4000 in today's dollars). Given the incident, the PPO was disbanded.

A few years later in the late 80's the Plumber's Philharmonic Orchestra was rebooted with a new and more wholesome mandate of promoting engineering leadership, spirit and involvement with only the occasional prank or two.

The Plumber's Philharmonic Orchestra runs and participates in many charity events throughout the year such as the Loonie Line, Relay for Life and Golden Valentines. They also host two Blues Pubs, known as Rowdy Day, where all profits are donated to charity. 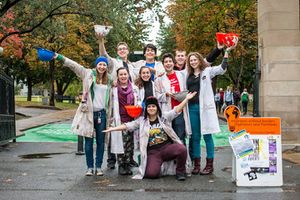