From EUSwiki
(Redirected from EUS Senator)
Jump to: navigation, search

The Engineering Senator is the connection between the EUS and McGill administration. They preside on McGill's Senate, a body tasked with supervision over academic matters of the University. Senate handles motions regarding a wide array of student interests, such as divestment, student code of conduct, fall reading week, approving reports from other branches of McGill, and more.

If you ever have a question about why things are the way they are at McGill, your senator is a good resource. They're the spokesperson for the engineering undergraduate faculty, contact them with any concerns you may have at senator@mcgilleus.ca.

The Engineering Senator's primary involvement is with regards to the Senate. In addition to that, the Senator is also a member of Senate Caucus which is a student body under VP University Affairs of SSMU. This body serves as an opportunity to strategize and discuss the state of various advocacy efforts, committee meetings, and constituency projects.

On the EUS front, the senator is a member of the EUS Council and the EUS Board of Governors. There responsibility on these bodies is to keep the EUS stakeholders up to date with the University's governing policies and discussions at Senate. It also allows the Senator to have sufficient knowledge of EUS operating policies for them to be better ambassadors at Senate.

During their term, Senators also have the opportunity to sit on multiple university sub-committees. Depending on the Senator's policy interests and focus projects, they get to choose from a pool of committees. Often times, these committees are a great way to understand policy work on a topic and use them as forums to initiate policy revision or advocacy efforts.

The Senator also has the chance to be the Senate Caucus's representative on SSMU Legislative Council. This is optional and depends if the candidate receives a vote of confidence from the rest of the student senators. 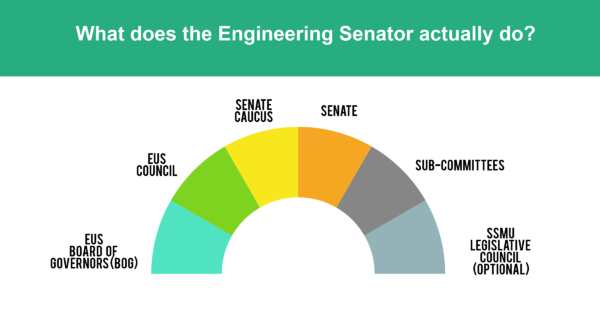 Overview of the Senator's portfolio

The senator has responsibilities to all three bodies that it is a part of: EUS, SSMU, and McGill. The specific responsibilities vary from year to year since the subcommittees they choose to sit on differ.

The senator must attend the Senate meetings and representing constituents. They may take up additional roles depending on their involvement in other subcommittees. The standing rules of procedure for the Senate can be found here.

The senator sits on both the EUS Council and the EUS Board of Governors, where they are endowed with the rights and responsibilities of a general member. The senator also submits a report to every Council meeting.
Currently the constitution differentiates between Delegate to Senate and Senator; the delegate to senate must be a regular member of the EUS, while, for whatever reason, the senator does not need to be.

According to Article 25 of the EUS Constitution

The Engineering Senator shall:
The Delegate to Senate shall:

Senators from all faculties join together to form the SSMU Senate Caucus. The Senate Caucus has its own meetings, through which the SSMU unites its efforts (in collaboration with the SSMU Board of Governors).
All faculties have one representative with the exception of Arts; in the event that they cannot elect a second senator, it will be offered to other faculties in descending order of size.
The VP University Affairs of the SSMU is tasked with holding the Caucus accountable. Both they and the SSMU President sit on the caucus and are members of McGill Senate. One of these members sits on the McGill Board of Governors.

According to the SSMU Internal Regulations of Representation and Advocacy: