The Bioengineering Undergraduate Student Society (BUSS) is a student organization which serves to represent all undergraduate students in the Department of Bioengineering at McGill University. BUSS is dedicated to providing academic and social opportunities to inspire, entertain, and guide its members through their undergraduate degree.

After the official formation of McGill's Undergraduate Department of Bioengineering in the 2016-2017 academic year, the first cohort of bioengineering undergraduate students collaborated with McGill's Chemical Engineering Student Society (ChESS) to integrate their department within the Engineering Undergraduate Society (EUS). BUSS was formally established in January 2017, after a unanimous vote by the EUS Council to recognize BUSS as an official student society under the EUS. The first ever BUSS Executive Committee was elected in February 2017. 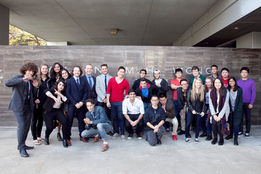 The first cohort of bioengineering undergraduate students at McGill.

At the start of every academic year, BUSS organizes a potluck as a way for returning students to catch up with peers and for incoming students to meet new friends. Usually taking place at an apartment, Potluck is an opportunity to have a wide variety of food, without having to cook all of it.

Blues Pub, the Engineering student pub is hosted by a different society every week to fundraise. Twice a year, BUSS hosts the event, and was the winner of Blues Pub of the year in 2017-2018.

Once in the fall and once in the winter, BUSS organizes a clothing sale for Bioengineering students to represent their department. The catalogues are usually made available early in the semester and clothing usually arrives about a month later. As clothing is sold at cost, this is an affordable way to show school spirit.

At the end of the Fall & Winter semesters, BUSS organizes a banquet at a local Montréal restaurant which is followed by an after-party with all the other Engineering departments. A couple of profs are invited and attend, as well as departmental staff. Banquet is one of the only semi-formal events, making it a great event for taking photos. The Winter banquet, usually in April, turns into a gala where awards recognizing spirit and various accomplishments are handed out.

BUSS Ride is the name of our very own industry tour. The first ever BUSS Ride took place January 2019 in Toronto, where students toured a biomedical technology company, attended a conference on innovation and invention in surgery, and had the opportunity to explore the city. BUSS Ride will be returning for its second edition January 24th-26th, 2020

Initially starting off as a speed-network event, BioEngage has turned into a month-long event involving various presentations, workshops, lab & company tours and fairs to get students involved in bioengineering and discover future career options.

Usually in conjunction with other small engineering departments such as ChESS and MEUS, BUSS hosts apartment crawls, where teams of around 10 people go around the Milton-Parc community, stopping at various apartments for food and drink.

All BUSS Council positions are elected in the Winter Semester of the previous academic year, excluding the U0, U1 and E&M Representatives which are selected by Selection Committee in September.

The First-Year Committee is a group of around 9 entering U0 and U1 students, working together to host events specifically for first-years.